It was not a disaster – no icebergs encountered!

This past weekend, I called for the Rocky Mountain Rainbeaus (3 sessions – Plus/A2, C1, and MS/Plus) and the Denver Half Crazies (2 sessions  – C2 and C3A).

The theme for the Saturday night party dance was Remember the Titanic. But before the dance started

, we played a party dice game called Bunko (aka Bunco, Bonco, Bonko). The game has been around for a while and there are many rule variations; this set is closest to what we played (but I liked this description, particularly the Food/Snacks:

It’s a good mixer game; people move around and change partners a lot. There’s absolutely no skill involved; the game is 100% luck. My luck was not in Saturday night.

, Mountain Mix: Chase Right for the Silver. It should be fun; a good way to break the ice and get people socializing (of course, just square dancing is a good way to do that also). Speaking of the fly-in, someone noticed that the roman numeral for 2009 is MMIX, so they made a couple of buttons: 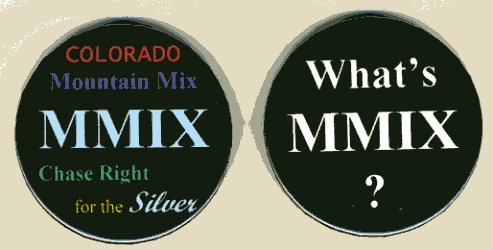 At the dance, I tried to keep an oceanic theme going. At Plus, we worked Load the Boat fairly strenuously in one tip. I had looked up Sink the Boat in Burleson’s, but it ends in a squared set with everyone facing out; it didn’t seem worth taking the time to teach it. Musically, of course, I had to do My Heart Will Go On (available on Hanhurst as an MP3 (MP3ABC 9)). I also threw in The Morning After from The Poseidon Adventure (available on vinyl (GMP 1014)).

I hope people had a good time; I sure did!