Back before I started square dancing, I read a lot of mysteries (well, I still do, but not in the copious quantities I did back then) and spent a lot of time at “Murder Unlimited” aka “Tasha’s Paperback Book Exchange”, a dead and still-missed bookstore in Albuquerque. The proprietor, Tasha Mackler, was there most of the time; after one bought a few books, she was able to pretty accurately recommend books and authors that one might also enjoy. She even wrote a book, Murder…by Category: A Subject Guide to Mystery Fiction, where you could find mysteries about cooking, mysteries about theater, etc.

So, when I started square dancing, she used to tell me I should write a mystery set in the square dance world. Having absolutely no writing skills, I never even considered it.

Jump ahead about 17 years, and there actually is a mystery set in dosado-land. Don Beck knows the author, Glenn Ickler, and told me about the book when I visited him and his family last summer. After I left, Don tracked down a copy of the book, A Deadly Calling, and lent it to me. 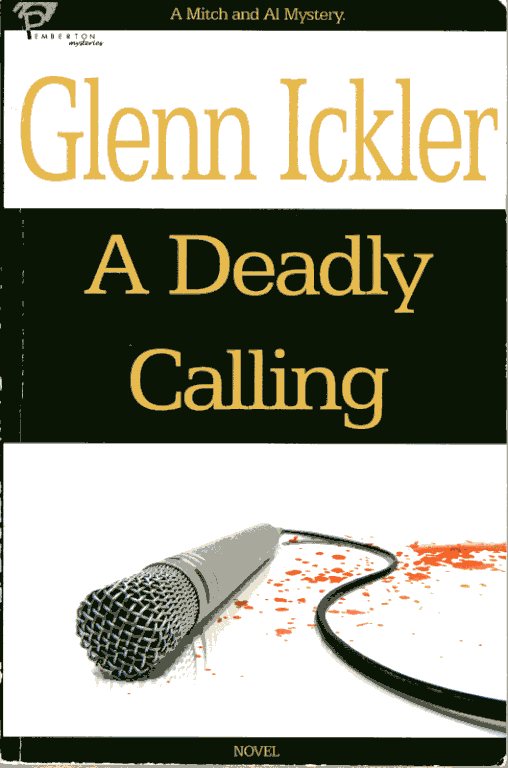 So, how is the book (as it relates to square dancing, of course)? Not awful.

Mitch, the protagonist, is a reporter and is assigned to cover an event at the square dance nationals in Minneapolis/St. Paul.  The dancers are trying to set a world record for number of dancers dancing on bricks, and it’s in the middle of a heat wave, so Mitch and his photographer sidekick Al figure they’ll get some pictures of dancers collapsing in the heat. We’re introduced to the a lady caller, Tennessee McGee, who’s from Minnesota, but affects a southern drawl, and always wears a big cowboy hat. She says, “I am what’s known as a national caller, which means I travel all over this great country doing my thing.” She also says, “Calling square dances is a kind of show biz, you know? If you want to get national bookings,  you’ve got to stand out from the crowd.”

No dancers collapse, but a caller does, and later dies (well, it is a murder mystery after all). The mystery itself is ho-hum, and the motive, while developed in a square dance setting, is universal. (I wonder if there’s anything in square dancing that would be a motive for  murder: “You stole my choreography, so you must die!”) Mitch is kind of a jerk, who is engaged to be married but attempts to play around with any attractive woman he happens to meet, including, of course, Tennessee McGee. He and his partner Al are also inveterate punsters, so you’ll get a few groans out of every chapter.

I read the book to see how it portrays square dancing. It’s clear that Glenn Ickler is a square dancer; he knows the lingo and the culture, noting that most of the dancers have gray and white hair, and even describing century books. One character, a single woman square dancer, says, “Guys without partners are worth their weight in gold. Hey, how about you learning to square dance? Our club has classes every Thursday starting in September,” capturing both the plight of single women in square dancing, and the relentless recruiting. Mitch’s response is typical Mitch; he didn’t care about square dancing, but he was interested in seeing more of the woman.

However, it’s also clear that he’s a dancer, and not a caller. On CALLERLAB, he has Tennessee say, “It provides the training courses for  new callers and the refresher classes for experienced callers. Big Eddie taught at Callerlab (sic) for a good many years.” I’ve found that a common misconception among dancers is that caller schools are called “callerlabs”. Of course,  the CALLERLAB convention does provide some caller training, but that’s not the same as a caller school.

Here’s a bio for one of the deceased callers:

Eddie Plummer Junior had become enamored with square dancing at the age of fifteen. The ever-changing patterns were fascinating to his mathematically-inclined mind, and he loved dancing in a group where he could put his hands on four girls. He joined a teenage square dance club and pestered the caller for a chance to try calling until, one night, he was given the  mike for a hash tip. Big Eddie had told Johnny that three minutes of seeing all those people moving the way he directed them made him feel like a god, and he decided, on the spot, to learn to be a caller.

“Pa said controllin’ a floor full of people was better than havin’ sex,” Johnny Plummer said. “But I ‘spect he got plenty of that, too, after the dances. He jist wouldn’t tell me that in front of Ma.”

At the age of twenty-two, Eddie Plummer Junior was still known as Little Eddie, but he had a degree in mechanical engineering from Kentucky University and a certificate of completion from Callerlab.

“What he had was a twenty-four-hour-a-day hard-on. The man wore a jock strap when he  called a dance so he could keep it under control. Otherwise, when the girls twirled, Lefty’s cock whirled.”

It’s a light, fun read, with some square dance talk, a lot of sex talk (but not much action, despite Mitch’s best efforts), and a whole lot of punning.

I’m sure Tasha would be pleased that someone wrote a square dance mystery.