Last night was the Second Sunday Contra and English Country Dance (for experienced dancers). The band was Cypher and the callers were Noralyn Parsons, Larry Daughenbaugh and me.

I’d asked Larry what dances he planned to do so I could work out a tentative program and choose my dances to avoid duplication. He was tentative on Chorus Jig, because it would depend on whether the band could do it. It turned out that the band could do it…if they brought the music, but they didn’t so he didn’t. I’d worked out two programs based on the Chorus Jig question. That was because a dance that I wanted to do (Hats off to Larry, by Penn Fix…I admit it, I wanted to do it because of the name…) is heavily asymmetric with a complicated figure (double figure eight), as is Chorus Jig (contra corners).

So I’ve been looking for a way to keep dances in my online database (an expanded, customized version of the Filemaker database available at American Country Dances On Line, and have them with me when I call. So far, I’m uncomfortable with using my Tungsten T3, although I have the database there, and it’s great if I need to quickly find some other dance. I’ve tried using the save as HTML option and then printing the resulting the webpage. Looks great, but a little cumbersome at the dance. So I worked up a print option that results in a double page spread that I can print up in a folded over, stapled booklet, custom made for each dance. An inside spread page looks like this: 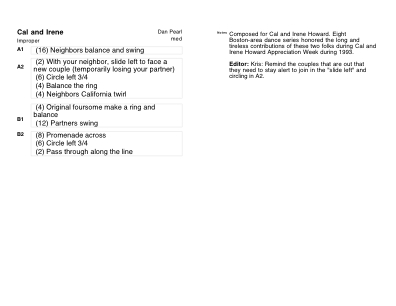 On the front page, I put info about the dance, including the tentative program. Inside are all the dances I might do, in the order I might do them. The dance is on the left hand page, the notes and comments are on the right.

At the dance, I discovered some additional benefits (other than being fairly compact and easy to read and handle). I could write notes for announcements on the back page. I could add notes at the dance, ready to be transferred into the database later. And a disadvantage: the other callers now know fer sure what a total nerd I am. Oh well.

At 7 pm, the scheduled start time, we had 8 people. I hadn’t planned on doing a square, but that seemed the most appropriate thing to do in that situation, so I did a MWSD-type ad hoc square featuring Star Thru. Before I started, I taught Star Thru by having the heads step in and face their corner (Pair Off in MWSD terms). I then did several Star Thrus, until it looked like they could do it relatively reflexively. Imagine my surprise when I called Heads Star Thru during the dance, and the dancers paired off before doing a star thru with the sides. Hmmm…. Then I had them in facing lines, and I said Ladies Chain (expecting two ladies chain across) and all 4 ladies chained, as in a square. I have to work really hard to get MWSD dancers to do that move from facing lines! So it was a learning process; I had to learn how to change my calls to get the dancers to do what I wanted. So I called until enough people wandered in to form a reasonable contra line and then quit. The people who were there on time got the reward (punishment?) of the square.

The rest of the dance went according to my (non-Chorus Jig) plan, although the last dance turned out to be different than I thought (my database had a dance called Gypsy Star by Adam Carlson, but Larry used a dance called Gypsy Star by Cary Ravitz). I think it was a fun dance…at least I had fun; it’s nice to work with other callers so one has a chance to dance as well as call.

In other contra news, my contra calling mentor, Merri Rudd, has a new website: merridancing.com. I’m sorry I’m going to miss her 50th birthday party next week at the FolkMADS dance, but maybe I’ll catch up with her at Boo Camp (PDF) or the Fire Ant Frolic